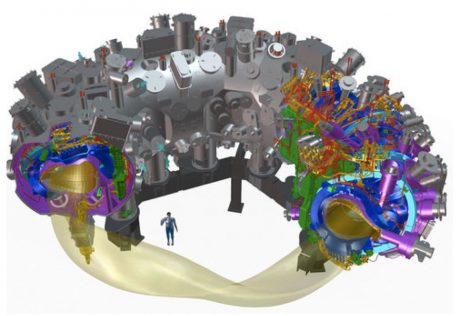 Neoclassical transport is a fundamental aspect of stellarator plasma scenario development. As we have discussed, advanced stellarators are designed in order to minimize neoclassical radial transport. On the other hand, once designed, predictive 1D transport simulations based on neoclassical transport theory at the core, complemented with simple models for turbulent transport at the edge, allow for estimates of confinement time, power load to the walls, and fuelling and heating requirements of future reactors based on the stellarator concept. This way to proceed has been supported by a step-by-step systematic validation of the predictions of neoclassical theory with experimental results in a number of medium-sized stellarators (LHD, W7AS, TJ-II…) in regimes as reactor-relevant as possible [Beidler-11, Yokoyama-07, Dinklage-13, Tallents-14], in which our group has participated. Generally speaking, these simulations tend to show, with some exceptions, reasonable agreement between the experimental and the neoclassical particle and heat fluxes within the core region. This behaviour is caused by the unavoidable separation from perfect omnigeneity and the unfavorable temperature scaling of the radial energy fluxes with temperature [Wakatani-98].

One of the basic milestones of the Stellarator Mission in the European Fusion Roadmap is to demonstrate the validity of the design of advanced stellaratators (such as Wendelstein 7-X, to begin operation in Autumn 2015) based on neoclassical predictions. A relevant feature of these predictions is that all of their simulations rely on simplifications such us the monoenergetic approach or the local ansatz. Nevertheless, recent contributions [Satake-14,Velasco-14] have extended these calculations by investigating, for several discharges, differences between the results of local and monoenergetic neoclassical codes (e.g. DKES [Hirschman-86]) and non-local, non-monoenergetic neoclassical codes (FORTEC-3D [Satake-08]), which include in the calculation higher order terms of the drift- kinetic expansion. A preliminary result of these works is that, for the plasma core, neglecting these terms may lead to overestimate the neoclassical contribution to radial ion energy transport, and therefore to underestimate the turbulent contribution to it. The discharges analyzed so far suggest that the effect is larger for low collisionalities in large ripple devices [Satake-14, Velasco-14]. Additionally, flows parallel to the magnetic field give rise to a toroidal current (the bootstrap current) that may affect the magnetic structure at high pressure [Peeters-2000, Velasco-2011]. Since the design of the W7-X divertor (the part of the device responsible for particle and energy exhaust) relies on a very accurate tailoring of the magnetic field [Feng-2006], a study of the effect of the aforementioned higher-order terms of the drift-kinetic equation in the neoclassical prediction of bootstrap current is in order.

Out of the three phenomena that we have discussed above, bootstrap current and energy and particle radial transport, the latter has attracted much especific interest in the recent years. The reason is that core density control is a critical issue on the path towards the development of steady-state scenarios in 3-D magnetically confined devices. This is specially the case for the W7-X line, where coupling of neoclassical energy and particle transport in the core can lead to hollow density gradients, unstable pressure profiles, and hence premature termination of the discharge [Maassberg-99]. One of the strategies developed in order to mitigate this problem consists on pellet injection [Pégourié-07]. With this in mind, a compact pellet injector [McCarthy-08]. has been recently commisioned for the TJ-II stellarator [McCarthy-15], and has become part of a recently-established inter-machine comparative activity [McCarthy-15b]. The pellet injection system allows to inject frozen hydrogen pellets into magnetically confined plasmas for fuelling, for modifying the density profile and as an active diagnostic (the local magnetic field pitch can be determined or suprathermal electron populations can be located). It is a powerful tool for plasma fuelling since it permits delivering particles directly to the plasma core.

From the theoretical point of view, pellet ablation is a complex phenomenon, involving atomic processes and electrostatic or magnetic shielding. When a pellet arrives at the plasma, ablation starts. Sublimated hydrogen forms a neutral cloud that shields it from ambient plasma, in a self-regulated manner, reducing the ablation rate. The cloud expands and moves with the pellet, while atomic processes take place, until ionization occurs. It then experiences a Lorentz force that stops its transversal movement and the ionized cloud starts to follow the magnetic field lines. Accurate models describing ablation, able to determine ablation rate, penetration depth, particle deposition or fueling efficiency must take all these processes into account. These models, together with a similarly accurate description of particle transport, can shed light on our capabilities to control the density profile in large stellators and achieve long-pulse operation. There is ongoing research in this field at the stellarators LHD [Matsuyama-12, Yasuhara-14] and W7-X [Turkin-2013].

While particle and energy transport in the plasma core are collisional phenomena, both are determined by turbulence closer to the plasma edge [Dinklage-13]. Nevertheless, for non-quasisymmetric stellarators, radial transport of charge is still dominated by the neoclassical contribution if the gyrokinetic ordering holds [Calvo-13, Calvo-14, Calvo-15]. Thus, the ambipolarity condition of the neoclassical fluxes imposes a constraint between the kinetic profiles (density, temperatures and radial electric field) which is usually exploited in order to predict the radial electric field profile (and the associated ExB flow) for given plasma conditions, see e.g. [Arevalo-12, Velasco-12, Velasco-12b, Velasco-14, Velasco-14b]). There are situations [Dinklage-13] in which ambipolarity of the neoclassical fluxes does not provide an accurate estimate of the radial electric field. In those cases, comparison with the experiment allows for an estimate of the non-neoclassical contribution to the radial current.

Since there is experimental confirmation that turbulence can be regulated by sheared radial electric fields [Burrell-97], neoclassical simulations can provide information about the tendency of a magnetic configuration to access to scenarios of reduced turbulence and improved confinement. The relation between mean and fluctuating radial electric fields in connection with confinement transitions has been studied from both the experimental and theoretical point of view at TJ-II [Estrada-09,Velasco-14b], and similar diagnostic capabilities will be available at the stellarator W7-X.

Go to the bibliography.