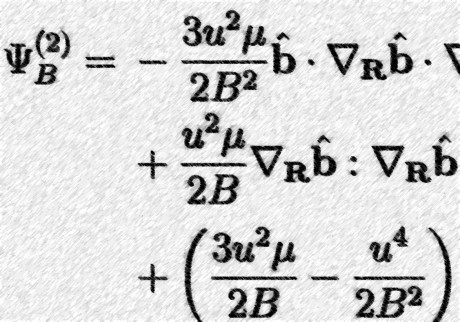 Understanding and predicting transport of particles, momentum and energy across the magnetic field in magnetically confined toroidal plasmas is of the utmost importance in the fusion energy program for an obvious reason: the highest the transport level, the lower the confinement time. Hence, relevant progress in the comprehension of transport phenomena will surely have an impact on future reactor design and cost.

Assume that our toroidal plasma is stable with respect to long-wavelength perturbations (comparable to the system size). Then, there are three essential mechanisms of transport: collisions (the theory of collisional plasma transport in a constant magnetic field constitutes the classical theory), magnetic field geometry (the theory of collisional plasma transport in a toroidal plasma constitutes the neoclassical theory), and microturbulence. Collisional transport theory in a magnetized plasma (gyrofrequency much larger than transit frequency, or equivalently, Larmor radius ρ much smaller than the typical length of variation of the magnetic field, L) with constant magnetic field [Braginskii- 65] closely resembles to Chapman-Enskog theories [Chapman-52] although it is not identical: parallel and perpendicular components are different in a magnetized plasma. Much more dramatic is the difference between Chapman-Enskog theories and neoclassical theory (the seminal reference for neoclassical transport is [Galeev-68]; see also the review [Hinton-76]). In the long mean-free-path regime, appropriate to typical temperatures of fusion-grade plasmas, the magnetic field geometry has enormous influence on transport to the point that transport coefficients are larger by orders of magnitude than those predicted by the classical theory.

In general, neoclassical theory sets only a lower bound on transport in toroidal plasmas. Fusion plasmas are usually unstable to perturbations with wavelengths perpendicular to the magnetic field on the order of the ion Larmor radius or smaller. We call them microinstabilities [Horton-99] and we are forced to live with them. They are not catastrophic but are responsible for the generation of microturbulence, that enhances transport (with respect to the neoclassical level) and therefore degrades confinement. Their typical frequencies are on the order of the sound speed over L. Gyrokinetic theory [Catto-78, Brizard-07] is the appropriate framework to describe microturbulence. It is a reduced kinetic theory, based on an asymptotic expansion of the Vlasov-Poisson or Vlasov-Maxwell set of equations in powers of ε = ρ / L, in which the degree of freedom associated to the gyration of particles around field lines (considered irrelevant because microturbulence time scales are much longer than the inverse of the gyrofrequency) has been rigorously averaged out.

On the theoretical side, we will mostly deal with fundamental problems in gyrokinetic theory, but not only. Some questions arising in neoclassical theory will also be addressed.