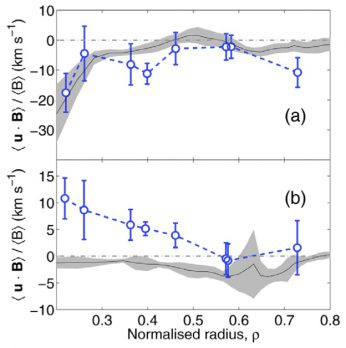 Plasma rotation has become one of the key ingredients of fusion plasma performance, specially after the discovery of a reduction of turbulence and transport through a sheared E × B rotation. With regard to stability, large toroidal rotation can stabilize resistive wall modes and neoclassical tearing modes. For these reasons, the physics of toroidal momentum transport, and the so-called intrinsic rotation, have become a very active area of research, mainly for their importance in the operation of a reactor plasma, for which the external torque will be negligible.

The bootstrap current is a neoclassical effect triggered by the radial gradients of the density and temperature in the presence of an inhomogeneous magnetic field. The control of the bootstrap current, and thus of the total parallel current, may lead to the possibility of continuous operation in tokamak overdense plasmas. In stellarators, it can provide access to improved confinement regimes, by means of control of the rotational transform profile. On the other hand, the bootstrap current may perturb the desired magnetic configuration produced by the external coils. This is especially important for shearless devices, such as W7-X or TJ-II, and crucial for stellarators that are equipped with an island divertor, whose operaton requires good control of the edge magnetic topology.

The calculation of the bootstrap current is a numerical challenge for non-axisymmetric devices, since the error estimates for computations in the long-mean-free-path (lmfp) regime of stellarators are usually large: the standard tool DKES has a convergence problem in the lmfp and Monte Carlo methods have an unfavourable scaling of the computing time with the collisionality. The code NEO-MC was explicitly developed by TU Graz in order to overcome the problem of poor convergence in the lmfp regime. Monoenergetic codes use nevertheless a simplified collision operator, which is inaccurate for parallel transport. Recent momentum-correction techniques applied to the calculation of the bootstrap current profile have improved the reliability of the predictions.

We have studied the bootstrap current of TJ-II and we have tried to validate the predictions against experimental observations:

Other related results can be found in: