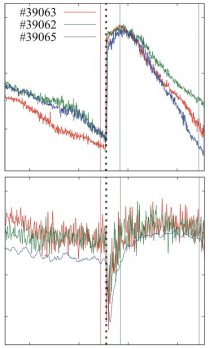 Core plasma fuelling is a critical issue for developing steady-state scenarios in fusion reactors. Gas puffing, the standard tool for creating and sustaining plasmas, will be inefficient in large-size devices, since the particle source is located at the edge. Moreover, the particle source due to recycling is expected to be small, since the plasma-wall interaction will be highly localized close to the divertor. Neutral beam injection has also become a standard method for plasma fuelling, where the associated source can be located, at least partially, in the core region. Nevertheless, with neutral beam injection, an additional energy source is introduced into the plasma, which may be problematic from the point of view of density control. In stellarators, the reason is that particle and energy transport are coupled in the core region, as they are dominated by the neoclassical contribution. In particular, in Helias-type stellarators, this coupling could create hollow density profiles and thus exacerbate the need for fuelling mechanisms that mitigate potential core depletion.

Pellet injection systems permit achieving relatively localized plasma fuelling without an associated energy source. For this reason, among others, they are the subject of intense research in tokamaks and in helical devices. For instance, the pellet injection system in the Large Helical Device extends its operational regime with good energy confinement. More recently, a four-barrel compact pellet injector has entered operation in the stellarator TJ-II. In Wendelstein 7-X, in operation since December 2015, a pellet blower gun is available during the second (OP1.2) phase of operation in order to fuel the core of plasmas heated using electron cyclotron resonance heating. As a result of this interest, comparative studies of pellet fuelling in these three devices have been performed. Two are the main subjects of this study: on the one hand, an effort is being made, both from the experimental and theoretical points of view, to describe the phenomena of pellet ablation. In particular, comparison of the penetration depth of the pellet with ablation models is expected to provide predictive capability on the possibility of core fuelling in large devices. A general prediction of these models (e.g. the widely used neutral gas shielding model) is that the penetration depth of the pellet may not be large enough to reach the core of dense plasmas. This increases the importance of the second line of research: transient transport of charged particles after pellet injection.

We have studied the neoclassical transport of particles, with the goal to find and understand stellarator scenarios without core depletion:

Other related results can be found in: